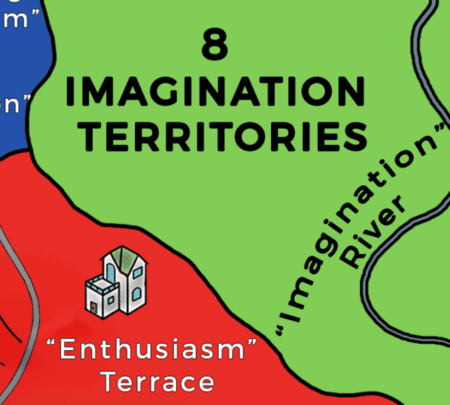 Now, more than ever, we need to imagine our way out of the unimaginable

Where there is no vision of a desirable Future, people die, confined in an "eternal present".

As Jean-Pierre Goux (President and founder of "One Home") says:

As far as collective pessimism is concerned, it has to do with our perception of the present. This perception is overwhelming because it cuts off people's ability to project themselves towards something other than the perpetuation of this present. However, the future has never resembled the past. Change has always come about either by chance, or thanks to courageous people who rolled up their sleeves to bring about the abolition of the death penalty or the right to abortion. The answer to this collective pessimism is to imagine desirable futures. We need both a vision of a future where crises are solved, and a tactical mind, aware of the way society works and the foibles and springs of human kind.

Yes. Vision guides action. And we indeed need Imagination to invent a Future no one has ever seen.

here is actually no precedent or grand model for the next economy. Nor has anyone figured out how to create a genuine democracy at large scales. That's up to us and from here on, its jazz. (...) as my friend David Orr recently said to me, he would be quite optimistic, if we had another 50 years. The crucible is wether we can fast forward this transformation in record time and beat the reaper. The word "crisis" comes from the greek word "krino". It means "to decide". We need to decide what kind of future we want and act like our lives depend on it. Because they do. Slouching toward sustainability will not turn the tide. Only immediate, bold and transformative action will enable us to make the leap across the abyss. It's NOW o'clock. If we appear to seek the unattainable, then let it be known that we do so to avoid the unimaginable. So wrote Tom Hayden in the Port Huron Statement in 1962. Now, more than ever, we need to imagine our way out of the unimaginable. As mythologist Michael Mead reminds us: "the deepest power of the Human Soul is Imagination. When human beings bring Imagination to the situation, we join the agents of creation." As the deep ecologist and Buddhist scholar Joanna Macy puts it: we are part of a vast global mouvement: the epic transition from empire to Earth community. The best way to predict the future is to create it. That's what we are here to do. All power to the Imagination.

Shapership: the Art of making the Future desirable, viable and actionable.

How does that happen?

By consciously changing the way we look at the world, adopting what we call "The Altitude Attitude". We climb a metaphorical scaffold and from the top, we have new perspectives and points of view on our Present and Future "Reality".

The Altitude Attitude is a practice that connects 3 levers:

All three aspects are required for a transformative impact

And what are we missing the most? True transformative visions!

It's about daring to DREAM because dreaming the Future can create the Future. We may have no idea how to do it. But somehow, thanks to a Vision, we make the impossible possible.

In the face of the enormity of the changes needed, we must continue to dream about the world we want to create. Only by setting that horizon, can we create a world that is truly better than the one we live in today.

So says an activist in the film "Paths to Utopia".

Not that activism is the only strategy to transform the system.

We might embody the Future now. Already today, there are thousands of traces "that another world is possible", "seeds of the future" created by people who have decided to live the Future they dream of IN THE PRESENT.

Some of them are concrete utopias. They are stories of pioneers - those we call "Shapers of the Future". They enrich Reality and Imagination by opening doors to other "possible" Futures.

These experimentations are not ways to "correct" or reform the Present. They embody dreams, hopes, other ideals and some may be the basic building blocks of a desirable, viable and actionable Future.

It is our right to dream

After the final NO, then comes a YES. And upon the YES, the Future of the world depends.